Amongst the reviews is this from author and Mail on Sunday columnist Peter Hitchens:

I have read this book…and recommend it very highly. I should note that in an article on the dangers of Marijuana legalisation in The Times… (25/11/2019) Clare Foges commends the work which has led to its publication. Mr Grainger (whom I know) has worked very hard and diligently to compile details of material which is reported locally but not nationally. He has done a public service. 30 years ago many of the horrific crimes he recounts would have featured in national newspapers and on national broadcast bulletins. But the growth in such violence has meant that such events are no longer as exceptional as they once were, and so made them less prominent in national coverage. That does not mean they are not important. They are very important indeed. The correlation between marijuana use and serious violence is strong and notable, appears [to] be meaningful (as there is also a correlation between marijuana use and mental illness) and should plainly be investigated properly to see if it is causal. Nobody, aware of the facts Mr Grainger has collected, could possibly support Marijuana legalisation until this link has been properly investigated and either confirmed or dismissed by research. The information he has compiled is extremely important and has also been submitted in book form to the current Government inquiry into drugs and violence led by Professor Dame Carol Black. The material is extremely disturbing, and paints a picture of modern Britain which is deeply distressing yet not much reflected in the literature or public discussions of the day. Anyone who reads it will benefit from the knowledge it contains. I very much hope it achieves widespread circulation, and recommend it without reservation. 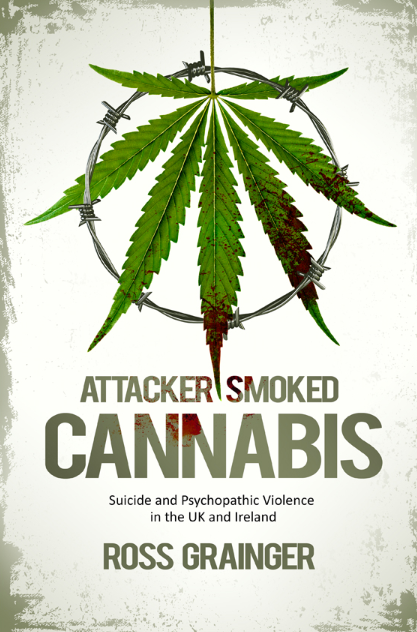 This site uses Akismet to reduce spam. Learn how your comment data is processed.

Follow Attacker Smoked Cannabis: suicide and psychopathic violence in the UK and Ireland on WordPress.com